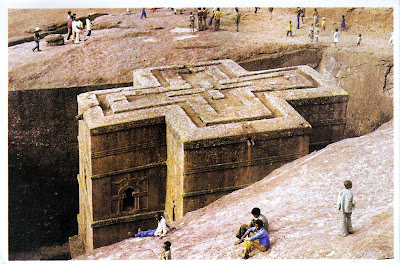 The Church of Saint George is one of eleven rock-hewn monolithic churches in Lalibela, a city in the Amhara Region of Ethiopia. The historical and religious site was named Lalibela after the King Gebre Mesqel Lalibela of the Zagwe dynasty, who commissioned its construction. He is regarded as a saint by the Ethiopian Orthodox Tewahedo Church. The church itself is part of the UNESCO World Heritage Site "Rock-Hewn Churches, Lalibela".

Posted by Branislav Ignjatov at 15:58