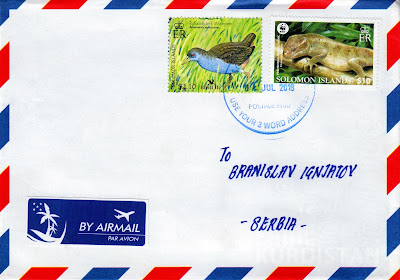 I received my first cover from Solomon Islands, a country consisting of six major islands and over 900 smaller islands in Oceania lying to the east of Papua New Guinea and northwest of Vanuatu and covering a land area of 28,400 square kilometers.  In 1568, the Spanish navigator Álvaro de Mendaña was the first European to visit the Solomon Islands archipelago, naming it Islas Salomón after the wealthy biblical King Solomon. It is said that they were given this name in the mistaken assumption that they contained great riches, and he believed them to be the Bible-mentioned city of Ophir.

Posted by Branislav Ignjatov at 23:08