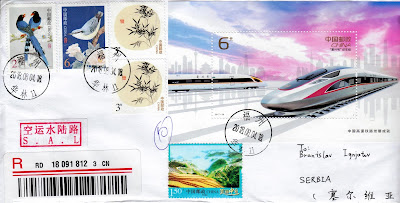 I received another registered cover from China, this time with minisheet High-speed Railway Development, issued on 25.11.2017. As regards railway systems, China has become the country with the largest operation scale, the most comprehensive technology and the most abundant high-speed railway managerial experience. It has successfully developed Chinese-standard “Renaissance" Electric Multiple Unit (EMU) bullet trains. With a traveling speed of up to 350 kp/h on the Beijing-Shanghai high-speed railway, it sets a new benchmark for the world's high-speed railway operating speed, showing that China's high-speed rail industry has entered a new era.

Posted by Branislav Ignjatov at 13:50