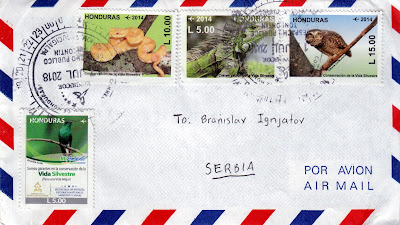 Stamps on cover:
The eyelash viper, green iguana and burrowing owl from set Conservation of Wildlife, issued on 6.10.2014. And the last stamp is honduran emerald from set Environmental Protection, issued on 10.4.2015.


Posted by Branislav Ignjatov at 19:17