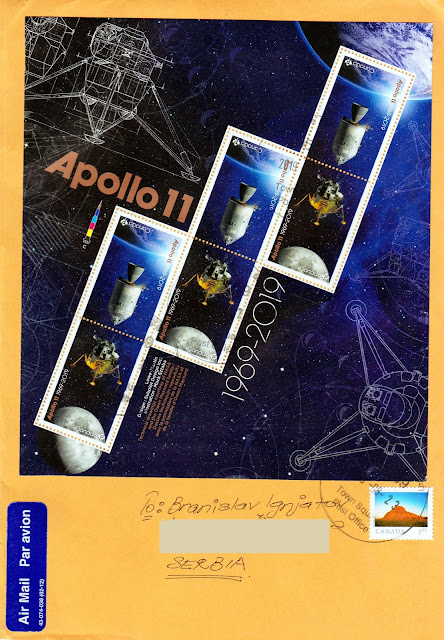 Canadian post issued beautiful two stamp set dedicated to 50th Anniversary of the Moon Landing on 27.6.2019 in several variants, and this beautiful sheet with 3 sets is one of them. Apollo 11 was the spaceflight that first landed humans on the Moon. Commander Neil Armstrong and lunar module pilot Buzz Aldrin formed the American crew that landed the Apollo Lunar Module Eagle on July 20, 1969. Armstrong became the first person to step onto the lunar surface six hours and 39 minutes later on July 21 ; Aldrin joined him 19 minutes later. They spent about two and a quarter hours together outside the spacecraft, and they collected 21.5 kg of lunar material to bring back to Earth.

Posted by Branislav Ignjatov at 22:55