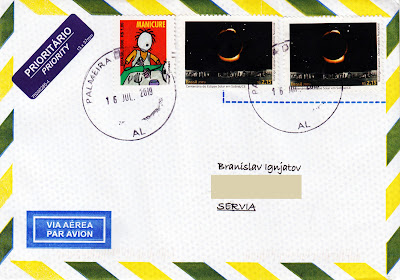 This year marks the centennial anniversary of the solar eclipse observed on 29th May 1919, which has constituted an extraordinary event for science. The measure of the starlight deflection by the Sun confirmed Einstein´s General Relativity Theory that deeply changed our conception of the Universe.  Decisive observations were done in Sobral (Ceará, Brazil), and also on Principe Island, by British astronomers. The results were publicly disclosed in London on November 6, 1919. After that day newspapers around the world reported headlines announcing a revolution in science: Einstein`s theory had supplanted Newton`s gravitational theory. To mark this occasion, Brazilian post issued this stamp on 29.5.2019.

Posted by Branislav Ignjatov at 02:42