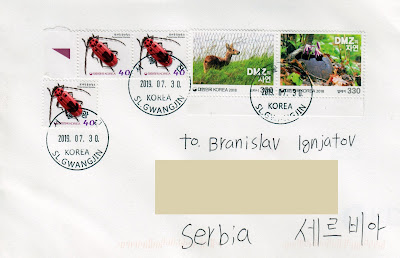 The Korean Demilitarized Zone is a strip of land running across the Korean Peninsula. It is established by the provisions of the Korean Armistice Agreement to serve as a buffer zone between North Korea and South Korea. DMZ is a border barrier that divides the Korean Peninsula roughly in half. It was created by agreement between North Korea, China and the United Nations Command in 1953. The DMZ is 250 kilometers long, and about 4 kilometers wide. This set is third in this series of wildlife in DMZ, and it's issued on 25.6.2018.

Posted by Branislav Ignjatov at 00:52