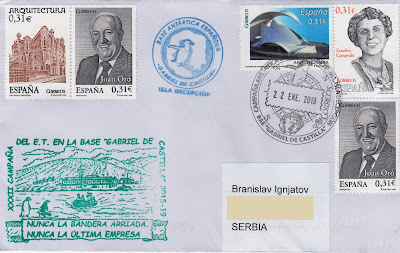 The Spanish Antarctic station Gabriel de Castilla was established in the1989/90 campaign. It is located on the SW coast of Port Foster in Deception Island. The base gives support to the scientific research in the island and it is operated by the Spanish Army. The station has different areas: living area, with accommodation for 14 people, scientific module, medical care module, engine room and mechanical workshop, store and emergency module. During the 2000/2001 campaign the base has been modernised, specially the living and scientific areas. The modifications have not increased the capacity of the station but have improved the scientific capabilities and the environmental protection measures.

Thank you so much, Li Ming, for this fantastic surprise!

Posted by Branislav Ignjatov at 20:46