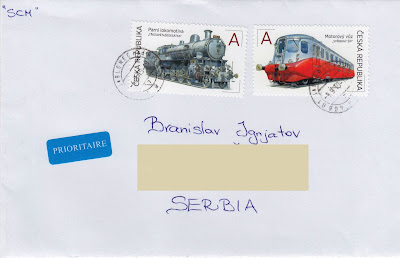 I received cover from Czech Republic with set The World on the Rails II issued on 5.9.2018.

The steam engine called “The Three Hundred and Sixty-Five”
After the creation of the Czechoslovak Republic, the state-owned Czechoslovak Railways had to deal with the poor condition of its steam engine fleet. The Ministry of Railways therefore announced a competition for a uniform design of new engines, which led to an order of the first independent Czechoslovak design of fast train engine number 365.0. The three series of an overall 40 engines were built by the First Czech and Moravian Machine Factory in Prague between 1921 and 1923. The light paint colour of engine 365.024 depicted on the stamp corresponds to the photograph taken at the factory in 1923. The engine was then painted black and handed over to Czechoslovak Railways. It was used until the late 1960s. Its current owner, the Railway Museum of Czech Railways in Lužné u Rakovníka, is planning to make it operational.

The motor coach called “The Silver Arrow”
Czechoslovak Railways were at the forefront of motorization of railway operations in Europe in the 1930s. In the second half of the 1930s, the company announced a competition for a new motor coach for fast intercity rail service. It had to be cost-effective, fast and comfortable to match the growing road transportation service. The events of the late 1930s and the outbreak of the Second World War hindered the project so that only a prototype coach, M 260.001, was eventually built by ČKD in March 1939. It was nicknamed “The Silver Arrow” due to its appearance. After a short trial run, the project was halted. The coach was hardly used after the war and eventually ended up without the engines and seats as a storage room. In the 1970s, it was saved as a part of Czechoslovak Railways’ collection. It was completely restored by the Railway Research Institute to look like the 1939 prototype. Starting from 2016, the legendary Silver Arrow, full of energy, can again be seen on the rails.


Posted by Branislav Ignjatov at 04:02