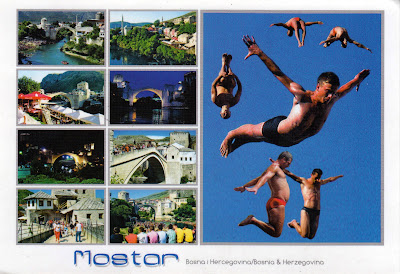 There's a 3 postal operators in Bosnia and Herzegovina, and this postcard is sent from from Mostar, where is located Croatian post operator in Bosnia. On left side you can see different views of famous Old bridge, which is popular for diving into ice cold waters of Neretva. The Old Bridge stood for 427 years, until it was destroyed on 9 November 1993 by Croat paramilitary forces during the Croat–Bosniak War. Subsequently, a project was set in motion to reconstruct it; the rebuilt bridge opened on 23 July 2004.The bridge is considered an exemplary piece of Balkan Islamic architecture and was commissioned by Suleiman the Magnificent in 1557. 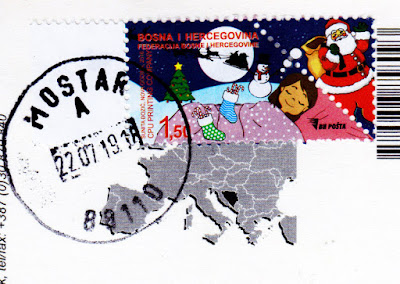 Posted by Branislav Ignjatov at 23:09