Flags of the World Series: Ireland 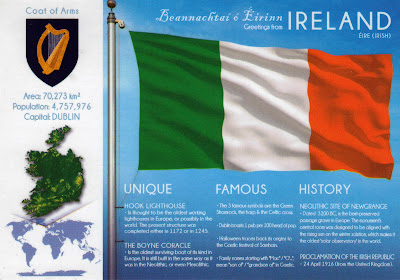 Ireland is an island in the North Atlantic. It is separated from Great Britain to its east by the North Channel, the Irish Sea, and St George's Channel. Ireland is the second-largest island of the British Isles, the third-largest in Europe, and the twentieth-largest on Earth. The name Ireland derives from Old Irish Eriu. This in turn derives from Proto-Celtic Iveriu, which is also the source of Latin Hibernia. Iveriu derives from a root meaning "fat, prosperous."

Posted by Branislav Ignjatov at 19:41