The Rise of the Indonesian Defence Industry 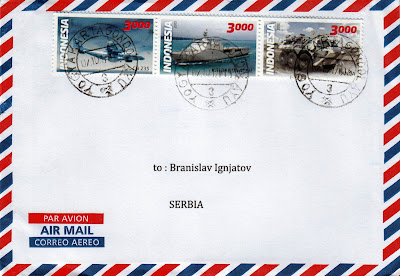 I received a cover from Indonesia with stamp set The Rise of the Indonesian Defence Industry, issued on 05.10.2015. On first stamp is CN-235 is a medium-range twin-engined transport aircraft that was jointly developed by Construcciones Aeronáuticas SA of Spain and Indonesian manufacturer IPTN, as a regional airliner and military transport. Its primary military roles include maritime patrol, surveillance, and air transport.

On third stamp is Anoa, a 6x6 armoured personnel carrier developed by PT Pindad of Indonesia. The vehicle is named after the Anoa, which is a type of buffalo indigenous to Indonesia.

Posted by Branislav Ignjatov at 19:54