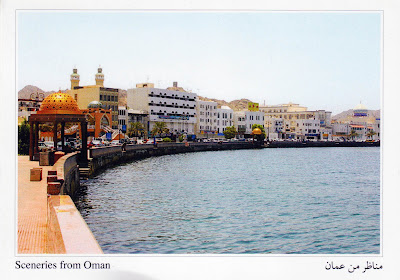 I received my first postcard from Oman, an Arab country on the southeastern coast of the Arabian Peninsula. Holding a strategically important position at the mouth of the Persian Gulf, the country shares land borders with the United Arab Emirates to the northwest, Saudi Arabia to the west, and Yemen to the southwest, and shares marine borders with Iran and Pakistan.

Postcard was sent from Nizwa, the largest city in the Ad Dakhiliyah Region in Oman and was the capital of Oman proper. Nice clear cancellation and three stamps: First and third stamps are Al Khanjar A'suri - Traditional Omani Dagger. First one is issued on 19.03.2001, and third on 07.12.2005. Second one is most important stamp - GCC Stamp Exhibition held in Nizwa in October 2015. Date of issue is 15.10.2015.

Posted by Branislav Ignjatov at 21:07