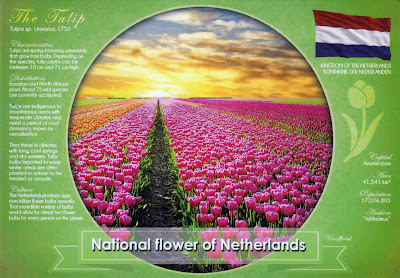 I received from Netherlands my first postcard from National flower series by Postcardsmarket.com. Tulips are my first association when i think about The Netherlands. In seventeenth century Netherlands, during the time of the Dutch Golden Age and Tulip mania, an infection of tulip bulbs by the tulip breaking virus created variegated patterns in the tulip flowers that were much admired and valued. This phenomenon was referred to as "broken". While tulips had probably been cultivated in Asia from the tenth century, they did not come to the attention of the west till the sixteenth century, when western diplomats to the Ottoman court observed and reported on them. They were rapidly introduced into Europe and cultivated and became a frenzied commodity during Tulip mania. Breeding programs have produced thousands of hybrid and cultivars in addition to the original species. 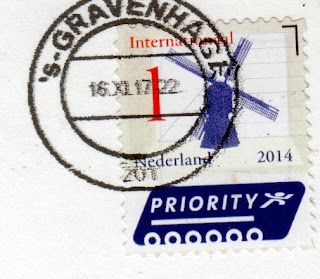 Posted by Branislav Ignjatov at 15:41