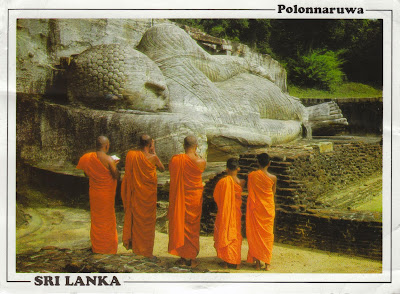 The second most ancient of Sri Lanka's kingdoms, Polonnaruwa was first declared the capital city by King Vijayabahu I, who defeated Chola invaders in 1070 to reunite the country once more under a local leader. The Ancient City of Polonnaruwa has been declared a World Heritage Site.

On this postcard you can see The Gal Vihara, rock temple of the Buddha situated in the ancient city of Polonnaruwa in North Central Province, Sri Lanka. It was fashioned in the 12th century by Parakramabahu I. The central feature of the temple is four rock relief statues of the Buddha, which have been carved into the face of a large granite rock. The images consist of a large seated figure, another smaller seated figure inside an artificial cavern, a standing figure and a reclining figure. These are considered to be some of the best examples of ancient Sinhalese sculpting and carving arts, and have made the Gal Vihara the most visited monument at Polonnaruwa. 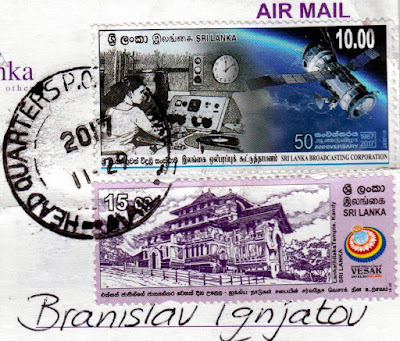 Stamps on postcard:
The 50th Anniversary of the Sri Lanka Broadcasting Corporation, issued on 05.01.2017.
Lankathilaka Temple (from set United Nations Day of Vesak), issued on 12.05.2017.

Posted by Branislav Ignjatov at 01:56