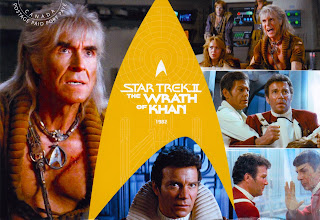 This postcard is from set of five Star Trek postcards issued by Canada Post this year, together with second set of Star Trek stamps. Star Trek II: The Wrath of Khan is a 1982 SF film directed by Nicholas Meyer and based on the 1960s television series Star Trek. The plot features Admiral James T. Kirk and the crew of the starship USS Enterprise facing off against the genetically engineered tyrant Khan Noonien Singh, a character who first appeared in the 1967 Star Trek episode "Space Seed". When Khan escapes from a 15-year exile to exact revenge on Kirk, the crew of the Enterprise must stop him from acquiring a powerful terraforming device named Genesis. The film is the beginning of a story arc that continues with the 1984 film Star Trek III: The Search for Spock and concludes with the 1986 film Star Trek IV: The Voyage Home. 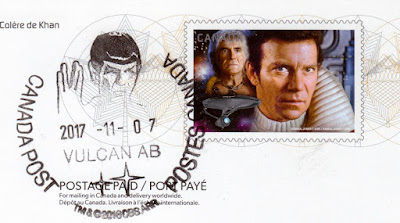 All postcards from this set are prepaid, but we can see here cool postmark from city Vulcan in Canada. Thank you Lars and Trevor! Live long and prosper!


Posted by Branislav Ignjatov at 22:12