Registered cover: 180 years since the establishment of official diplomatic relations between Great Britain and Serbia 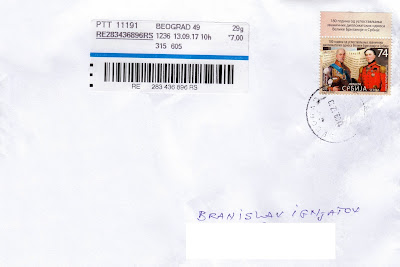 I received a registered Serbian cover: 80 years since the establishment of official diplomatic relations between Great Britain and Serbia. Diplomatic relations between the United Kingdom and Serbia began in 1837, due to the fact that, among other things, Prince of Serbia Miloš Obrenović (left on stamp) understood that Serbia should develop relations not only with the East, but also with the West. Colonel George Lloyd Hodge (right person on stamp) was appointed the first British consul to Serbia: he handed his credentials to Prince Miloš in Kragujevac, the capital of Serbia, an autonomous principality in Ottoman Empire.

Posted by Branislav Ignjatov at 22:13