Animals in the Dutch Wadden on cover from Netherlands 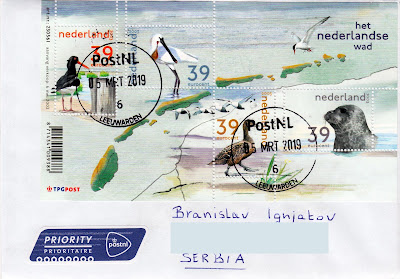 The Dutch wadden region has five inhabited and three uninhabited islands. The ‘Afsluitdijk’ (Enclosure Dam) forms a solid border with the freshwater IJsselmeer. The sea dikes along the Holland, Frisian and Groningen coasts protect the sea clay regions, formed when the marshes were reclaimed. The German border lies to the east, by the Ems-Dollard estuary. Because the tidal differences in the Dutch Wadden Sea are not great (1 to 2 meters), the currents are relatively low, allowing lots of sand and mud to subside. Many banks lay exposed during low tide, which is good for seals and shorebirds. This wonderful mini sheet is issued on 6.5.2003.

Posted by Branislav Ignjatov at 00:32