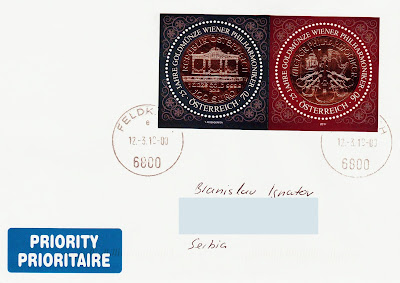 The Vienna Philharmonic is a bullion coin of gold, silver, or platinum, produced by Münze Österreich AG. It is named for the Vienna Philharmonic orchestra, which inspires the design of both sides of the coins. The one troy ounce gold version was first introduced in 1989 with a face value of 2,000 Austrian schillings and is generally one of the world's best selling bullion coins. In 2002, with the adoption of the euro currency, the nominal value of the one ounce coin was changed to €100. Austrian post commemorated 25th anniversary of coin with these two beautiful stamps printed in ffset lithography and hot stamping, and released on 5.11.2014. 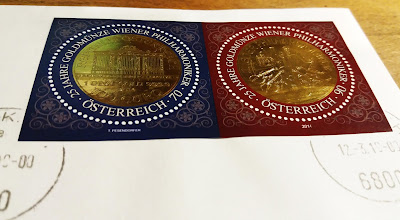 It's hard to show on scanned copy how this gold foil looks incredible realistic, so i took a photo with my phone camera in different angle. Simply beautiful!

Posted by Branislav Ignjatov at 22:09