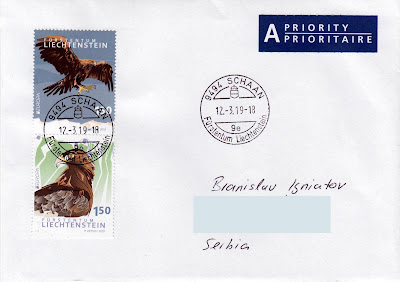 “National Bird” is this year’s theme of the Europa stamps issued by PostEurop, the trade association of European public postal operators. As Liechtenstein does not have a national bird of its own, Philately has decided to depict the impressive golden eagle and is presenting it with the two motifs “Golden Eagle Approaching” and “Golden Eagle on the Lookout” (face value: CHF 1.50 each) as a combined print on a small sheet of 10 stamps. Owing to Liechtenstein’s small size and the home range of around 50 square kilometres that a golden eagle maintains, the country only has a few pairs of these birds of prey. The king of the air as the bird is also often called has dark brown feathers with a lighter golden brown head and neck. It has a wingspan of more than two metres and its prey includes mammals, birds and carrion. Stamps are issued on 4.3.2019.

Posted by Branislav Ignjatov at 00:20