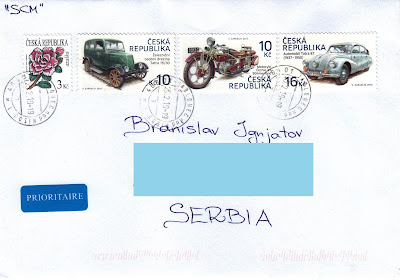 Historical vehicles is long running and one of my favorite series from Czech Republic. On this cover you can see one complete set issued on 12.6.2013 and half of set issued on 21.9.2016, and also one definitive flower stamp.

The Tatra 15/30 is a unique four-seat engine-driven draisine (railcar mounted on a four-wheel undercarrige). The draisin has a front-mounted engine and rear-wheel drive. It is driven by a boxer air-cooled, flat, four-cylinder with a capacity of 1,680 cc and an output of 18 kW (24 HP). It has a two-speed gear. The maximum speed is 80 km/h.

The workshop where the first motorcycles Čechie-Böhmerland were built was set up in 1925 in Krásná Lípa by Albin Hugo Leibisch (1888-1965). He began by building custom motorcycles. It took some time before they were made in series.

The Tatra 87 (T87) was a car built by Czechoslovak manufacturer Tatra. It was powered by a rear-mounted 2.9-litre air-cooled 90-degree overhead cam V8 engine that produced 85 horsepower and could drive the car at nearly 160 km/h. It is ranked among the fastest production cars of its time.


Thank you so much, Michaela!

Posted by Branislav Ignjatov at 00:07