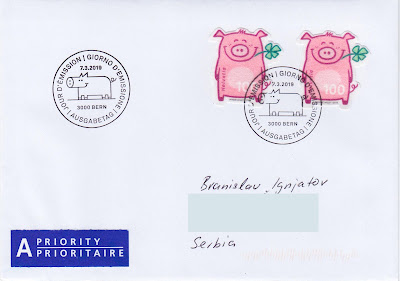 In Switzerland, pink pig is a symbol of good luck. But where does this idea come from? The most likely explanation can be found in a medieval custom: in traditional competitions, the worst-performing participant was not only ridiculed, but often also received a piglet as a consolation prize. This was a stroke of luck, however, as pigs were very valuable in those days: they did not need expensive fodder, produced lots of offspring and were quickly ready for slaughter. Rather than having the normal, rectangular shape of a stamp, this one is round with smooth edges – just like a genuine lucky pig. But that’s not all, because the stamp itself is actually soft to the touch and has a velvety surface that really makes you want to stroke the happy pink pig. To give the stamp its softness, the paper first had to be sprinkled with soft particles before being printed. This is why these stamps took three whole months to be completed.

Posted by Branislav Ignjatov at 23:55