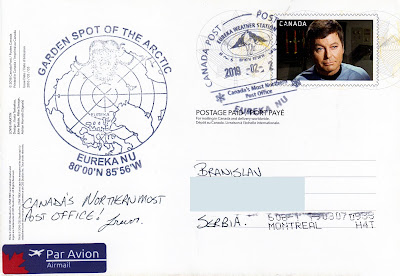 There's many interesting post offices in Canada, and this is one of them,  Eureka - "The Garden Spot of the Arctic".Eureka is a small research base on Fosheim Peninsula, Ellesmere Island, Qikiqtaaluk Region, in the Canadian territory of Nunavut. It is located on the north side of Slidre Fiord, which enters Eureka Sound farther west. Eureka was founded on April 11, 1947, as part of a requirement to set up a network of Arctic weather stations. On this date, 100 tonnes of supplies were airlifted to a promising spot on Ellesmere Island, and five prefabricated Jamesway huts were constructed. Regular weather observations began on January 1, 1948. The station has expanded over the years. At its peak, in the 1970s, at least fifteen staff were on site; in 2005, it reported a permanent population of zero with at least 8 staff on a continuous rotational basis. Of course, there is also post office which cancel your mail with this beautiful postmarks. 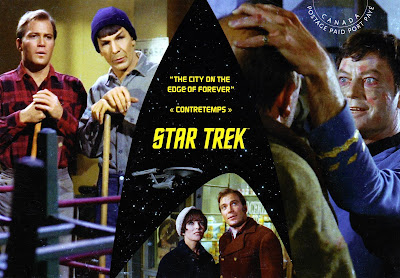 My friend Trevor used another Star Trek postpaid postcard for this, and this one is dedicated to another classic episode of original Star Trek show - The City on the Edge of Forever.

Thanks a lot, Trevor!


Posted by Branislav Ignjatov at 17:10