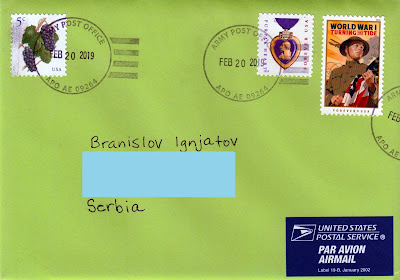 This cover is sent by US military post in Germany, from one of many US military facilities in Germany. APO is short for Army Post Office and AE is used for armed forces in Europe, the Middle East, Africa, and Canada (AP is for the Pacific; and AA is the Americas excluding Canada), and number behind them is a ZIP-code. Nice army related stamps on right side: Purple heart, issued on 11.10.2014. and World War I - Turning the Tide, issued on 27.7.2018.

The Purple Heart is a United States military decoration awarded in the name of the President to those wounded or killed while serving, on or after April 5, 1917, with the U.S. military. With its forerunner, the Badge of Military Merit, which took the form of a heart made of purple cloth, the Purple Heart is the oldest military award still given to U.S. military members – the only earlier award being the obsolete Fidelity Medallion.

Additional stamp on left side is definitive stamp Grapes, issued on 24.2.2017.

Posted by Branislav Ignjatov at 14:40