75th anniversary of D-Day on cover from Canada 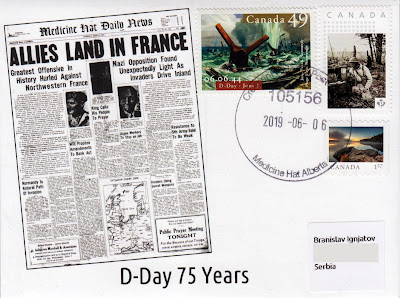 D-Day or The Normandy landings were the landing operations on Tuesday, 6 June 1944 of the Allied invasion of Normandy in Operation Overlord during World War II. Codenamed Operation Neptune was the largest seaborne invasion in history. The operation began the liberation of German-occupied France (and later western Europe) from Nazi control, and laid the foundations of the Allied victory on the Western Front. My friend Trevor marked this day with this nice cover he designed and also with this personalized stamp (upper right corner) of his great uncle Alvin Peterson which fought there.
There is also one older Canadian stamp dedicated to D-Day, issued on 6.6.2004. 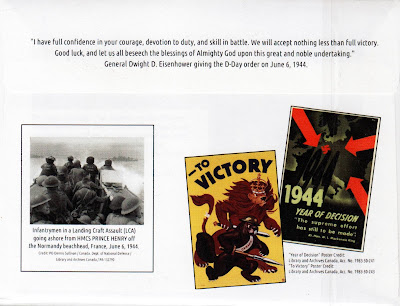 There's also a lot of interesting data on the back of cover and couple of nice old propaganda posters.

Posted by Branislav Ignjatov at 01:27