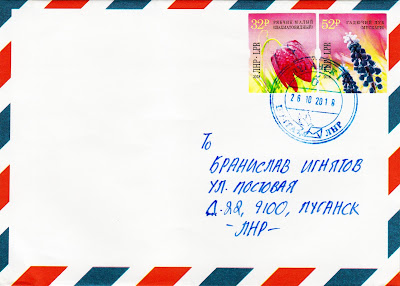 This is my first cover from disputed territory called Luhansk People's Republic, in the Donbass region, in eastern Ukraine. Along with the Donetsk People's Republic (DPR), the LPR declared independence from Ukraine in the aftermath of the 2014 Ukrainian revolution. An armed conflict with Ukraine followed its declaration of independence, during which the LPR and DPR received military and humanitarian assistance from Russia. This conflict is still ongoing as of August 2019. LPR remains unrecognised by any UN member state, including Russia.

There's no international postal service in Luhansk, only domestic. So you can receive mail only to address within Luhansk, as you can see on this cover. This flower stamps are part of set Red Book, issued on 20.8.2018.

Posted by Branislav Ignjatov at 03:50