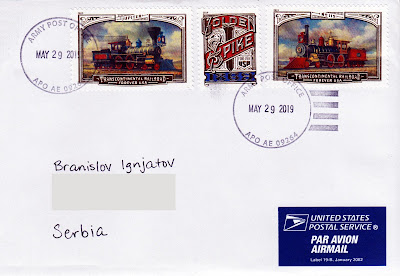 This fantastic stamps set with gold foil is issued on 10.5.2019. to commemorate The 150th Anniversary of the Transcontinental Railroad. The Transcontinental Railroad was a 3,077 km continuous railroad line constructed between 1863 and 1869 that connected the existing eastern U.S. rail network at Council Bluffs, Iowa with the Pacific coast at the Oakland Long Wharf on San Francisco Bay. The resulting coast-to-coast railroad connection revolutionized the settlement and economy of the American West. It brought the western states and territories into alignment with the northern Union states and made transporting passengers and goods coast-to-coast considerably quicker, safer and less expensive. 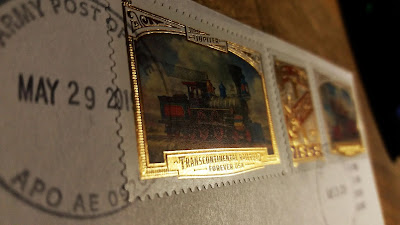 On scanned copy you can't see beauty of gold foil printing, so i decided to took couple of shots with mobile phone camera. 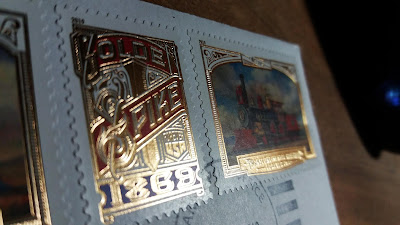 Thank you so much, Kathy!

Posted by Branislav Ignjatov at 02:10