Endangered species on cover from Tunisia 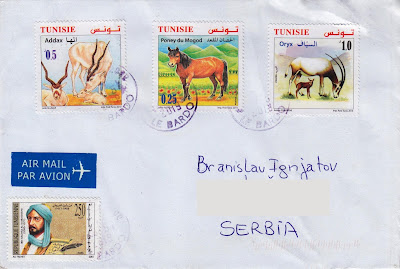 This is cover from Tunisia with complete set Endangered species, issued on 23.5.2019.

The addax (Addax nasomaculatus), also known as the white antelope and the screwhorn antelope, is an antelope of the genus Addax, that lives in the Sahara desert. The addax is a critically endangered species of antelope, as classified by the IUCN. The addax was once abundant in North Africa, native to Chad, Mauritania and Niger. It is extinct in Algeria, Egypt, Libya, Sudan and Western Sahara. It has been reintroduced in Morocco and Tunisia.

The Mogod Pony comes from the northernmost area of Tunisia and is thought to be a strain of the mighty Barb horse, refined and bred to suit the area over centuries. Sadly as machines began to replace animals in the 20th century their numbers began to dwindle.

Oryx is a genus consisting of four large antelope species called oryxes. Their fur is pale with contrasting dark markings in the face and on the legs, and their long horns are almost straight.
The Arabian oryx was only saved from extinction through a captive breeding program and reintroduction to the wild. The scimitar oryx, which is now listed as Extinct in the Wild, also relies on a captive breeding program for its survival.

Posted by Branislav Ignjatov at 20:47