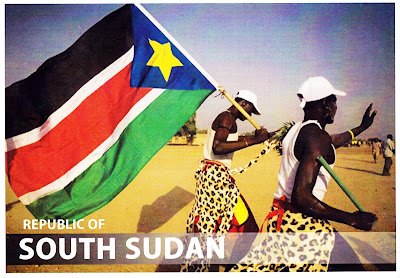 This is my firs postcard from South Sudan, a landlocked country in East-Central Africa. It gained independence after bloody war from the Republic of the Sudan in 2011, making it the most recent sovereign state with widespread recognition. Its capital and largest city is Juba. Sudan was occupied by Egypt under the Muhammad Ali dynasty and was governed as an Anglo-Egyptian condominium until Sudanese independence in 1956. Following the First Sudanese Civil War, the Southern Sudan Autonomous Region was formed in 1972 and lasted until 1983. A second Sudanese civil war soon broke out, ending in 2005. Later that year, southern autonomy was restored when an Autonomous Government of Southern Sudan was formed. South Sudan became an independent state on 9 July 2011, following 98.83% support for independence in a January 2011 referendum. It has suffered ethnic violence and endured a civil war since 2013. 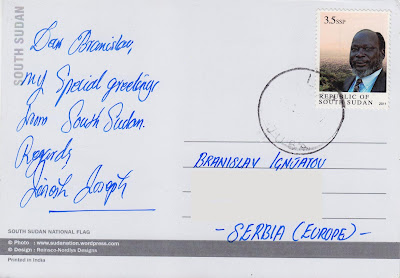 There is no postal service in South Sudan at the moment. You can get cancellation in Juba, but than you must use DHL to send abroad. Stamp on postcard is President John Garang, issued in 9.7.2011.

Posted by Branislav Ignjatov at 00:39