Red panda on cover from Bhutan 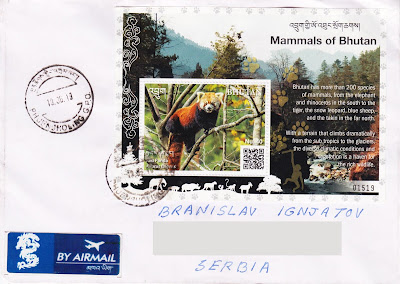 I received cover from Bhutan with red panda, one of my favorite animals! The red panda (Ailurus fulgens) is a mammal native to the eastern Himalayas and southwestern China. It is listed as Endangered on the IUCN Red List because the wild population is estimated at fewer than 10,000 mature individuals and continues to decline due to habitat loss and fragmentation, poaching, and inbreeding depression. The red panda is the only living species of the genus Ailurus and the family Ailuridae. It has been previously placed in the raccoon and bear families, but the results of phylogenetic analysis provide strong support for its taxonomic classification in its own family, Ailuridae, which is part of the superfamily Musteloidea, along with the weasel, raccoon and skunk families. This fantastic mini sheet is from set Mammals of Bhutan, issued on 1.2.2019.

Posted by Branislav Ignjatov at 01:21