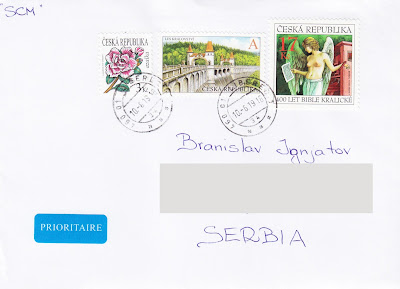 On this cover from Czech Republic you can see in the middle stamp Les Království Dam (issued on 6.3.2019.), which from a distance looks like a castle. It borrowed its name from the neighboring former royal forest.  Thanks to its location in the forested valley of the river Elbe, and its architectonic rendering, the dam is one of the most beautiful in the entire Czech Republic, and perhaps that’s why it was declared a National Technical Monument in the year 1964.

Last stamp is dedicated to The 400th Anniversary of the Bible of Kralice, and it's issued on 16.10.2013. The Bible of Kralice was the first complete translation of the Bible from the original languages into the Czech language. Translated by the Unity of the Brethren and printed in the town of Kralice nad Oslavou, the first edition had six volumes and was published between 1579 and 1593.

Posted by Branislav Ignjatov at 22:29