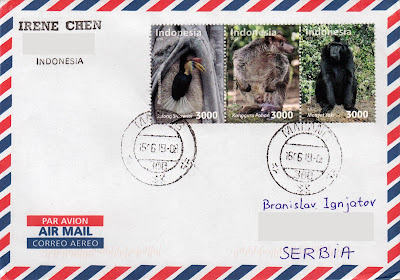 This cover from Indonesia shows three species of fauna found in Indonesia, from set issued on 5.11.2018. Knobbed Hornbill (Rhyticeros cassidix) is a colorful hornbill native to Indonesia. The species is sometimes placed in the genus Aceros. The knobbed hornbill is the faunal symbol of South Sulawesi province. Ursine Tree-Kangaroo (Dendrolagus ursinus) is a species of marsupial in the family Macropodidae. It is endemic to the Vogelkop and possibly the Fakfak Peninsulas, West Papua, Indonesia. It is threatened by habitat destruction and is listed as "vulnerable" by the International Union for Conservation of Nature. Celebes Crested Macaque (Macaca nigra), also known as the crested black macaque, Sulawesi crested macaque, or the black ape, is an Old World monkey that lives in the Tangkoko reserve in the northeastern tip of the Indonesian island of Sulawesi (Celebes), as well as on smaller neighboring islands.


Posted by Branislav Ignjatov at 03:25