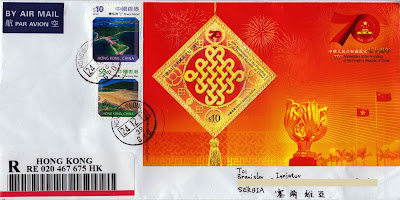 Hongkong Post issued a set of four special stamps and a stamp sheetlet on the theme "70th Anniversary of the Founding of the People's Republic of China". On this cover you can see souvenir sheet from that set released on 1.10.2019. The founding of the People's Republic of China was formally proclaimed by Mao Zedong, the Chairman of the Communist Party of China, on 1 October 1949 at 3:00 pm in Tiananmen Square in Beijing, the new capital (Nanking had been the capital of the former Republic of China). The first public parade of the then new People's Liberation Army took place there, following the chairman's address of the formal foundation of the new republic.

Posted by Branislav Ignjatov at 19:22