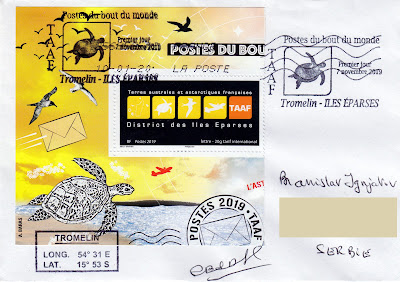 The Scattered Islands in the Indian Ocean consist of four small coral islands, an atoll, and a reef in the Indian Ocean, and have constituted the 5th district of the French Southern and Antarctic Lands  since February 2007. This cover is sent from Tromelin Island, a low, flat island in the Indian Ocean about 500 kilometers north of Réunion and about 450 kilometers east of Madagascar. Tromelin has facilities for scientific expeditions and a weather station. It is a nesting site for birds and green sea turtles. This beautiful FDC dedicated to Tromelin was issued on 7.11.2019. You can also see machine cancellation added 2 months later by French Post. On the bottom of the cover is signature, possible by postmaster, I'm not sure.


Thank you so much, Axel!

Posted by Branislav Ignjatov at 22:10