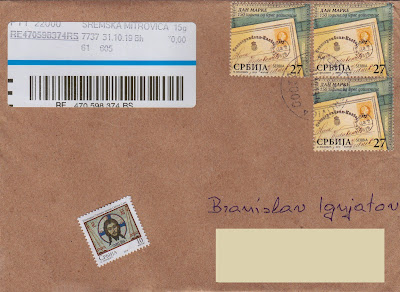 The world’s first official postal card was released on 1 October 1869 for inland postal traffic within the Austro-Hungarian Monarchy. Professor of economics Emanuel Herrmann, in January of 1869 in Viennese press proposes the new means of postal communication. He suggested the 2 kr. price for short messages being carried on standard forms lower even than that for a local letter, and by printing remark that the post denies any responsibility for the content of the message, he solved the main problem. New mean of communication was given the name Correspondenz-Karte.

Prepared thoroughly, postal cards were printed on yellowish paper 122 x 85 mm in size in huge quantities and timely distributed to all countries of the Dual Monarchy, with imprinted stamp of 2 kr. for unlimited traffic. Difference existed only with the coats of arms, Austria and Hungarian. The employees were strictly ordered to treat the postal cards like they would letters, to accept and process them without delay, deliver promptly, while they were also subject to registered handling. Knowing that the mail was delivered twice and in bigger cities even several times a day, postal cards made possible to arrange a meeting or business the same day for the low price. The success was immense! According to data, only on first day some 10.000 were sold, during the first month 1,4 million and by the end of year some 3 million pieces! The following year several European countries introduced this novelty, and Serbia did it in 1873.

In today’s Serbia, in Vojvodina, all three varieties of the first postcard circulated: the Austrian, distributed to Military Border, and Hungarian on both languages – German and Hungarian. The addressing language was irrelevant, so the Serbs as other nationalities wholeheartedly accepted postal cards, noticing that renouncement of responsibility for the contents allows them cheap communication in own language. Presented postal card is probably the oldest preserved from our area, written on 13th and posted on Friday, October 15th 1869, from Novi Sad to Vrdnik, last post Irig, received the same date.

Posted by Branislav Ignjatov at 04:09