Flags of the World Series: Panama 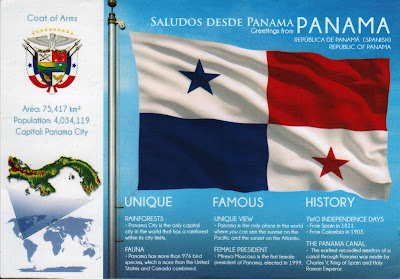 Panama is a transcontinental country in Central America and South America, bordered by Costa Rica to the west, Colombia to the southeast, the Caribbean Sea to the north, and the Pacific Ocean to the south. The capital and largest city is Panama City, whose metropolitan area is home to nearly half the country's 4 million people.

Panama was inhabited by indigenous tribes before Spanish colonists arrived in the 16th century. It broke away from Spain in 1821 and joined the Republic of Gran Colombia, a union of Nueva Granada, Ecuador, and Venezuela. After Gran Colombia dissolved in 1831, Panama and Nueva Granada eventually became the Republic of Colombia. With the backing of the United States, Panama seceded from Colombia in 1903, allowing the construction of the Panama Canal to be completed by the US Army Corps of Engineers between 1904 and 1914. The 1977 Torrijos–Carter Treaties led to the transfer of the Canal from the United States to Panama on December 31, 1999. 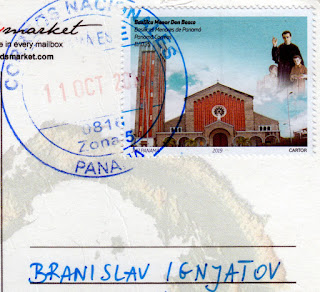 Stamp on postcard is Basílica of Don Bosco in Panama City, from set World Youth Day 2019, an international event organized by the Catholic Church in Panama City and it was the first of its kind celebrated in Central America.


Thank you so much, Joanna and Cass!

Posted by Branislav Ignjatov at 21:55