Flags of the World Series: Kuwait 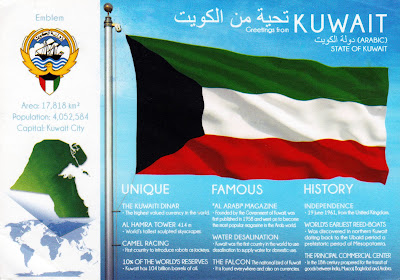 Kuwait is a country in Western Asia. Situated in the northern edge of Eastern Arabia at the tip of the Persian Gulf, it shares borders with Iraq and Saudi Arabia. As of 2016, Kuwait has a population of 4.5 million people: 1.3 million are Kuwaitis and 3.2 million are expatriates. Expatriates account for approximately 70% of the population. Kuwait is very rich country, but with very poor and highly unreliable postal system. If you manage to arrange some mail from Kuwait, there's a big chance you'll never receive it. I've finally had success and received this card sent on 5th January 2019 and received at the end of January 2020! More than a year! 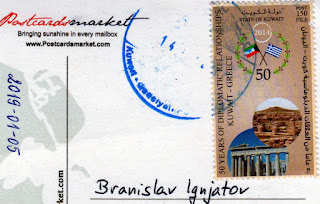 Thank you so much, Robert, for helping me to get this country of my missing countries list!

Posted by Branislav Ignjatov at 04:31