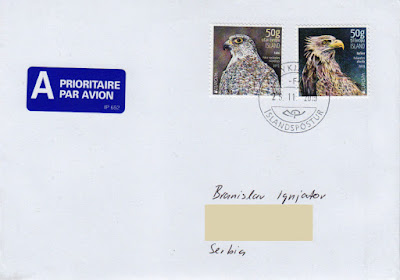 Íslandspóstur issued two beautiful stamps for Europa CEPT 2019 National Birds on 11.4.2019. Left bird is gyrfalcon (Falco rusticolus), the most famous of all Icelandic birds. Iceland’s national Order is the Order of the Falcon. For centuries, falcons were caught in Iceland and brought to Europe where they were used for hunting and games. The falcon catches its prey in air, but also on land and water, its preferred food being the ptarmigan. This may be the reason why most falcons pairs are found 2-4 years after the ptarmigan population is at its height. Presently the Icelandic falcon stock is estimated at 300-400 breeding pairs. The falcon is on the list of endangered species in imminent danger.

And on right stamp is white-tailed eagle (Haliaeetus albicilla), bird of prey breeding in northern Europe and Asia. The eagle became almost extinct in Europe, but preservation activities have made it possible to rebuild some nest sites. Males are smaller than female birds. The eagle reaches sexual maturity four to five years old. The eagle population in Iceland is slowly recovering and counted 76 adult couples in 2017, having more than tripled over 50 years. They catch birds and fish, even taking lambs and seals when the opportunity arises. The eagle was accorded full status as protected species in 1913.

Posted by Branislav Ignjatov at 02:06