Flags of the World Series: Suriname 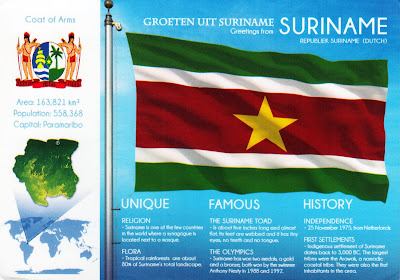 Suriname  is a country on the northeastern Atlantic coast of South America. It is bordered by the Atlantic Ocean to the north, French Guiana to the east, Guyana to the west and Brazil to the south. At just under 165,000 square kilometers, it is the smallest sovereign state in South America. Suriname was long inhabited by various indigenous people before being invaded and contested by European powers from the 16th century, eventually coming under Dutch rule in the late 17th century. As the chief sugar colony during the Dutch colonial period, it was primarily a plantation economy dependent on African slaves and, following the abolition of slavery in 1863, indentured servants from Asia. Suriname was ruled by the Dutch-chartered company Society of Suriname between 1683 and 1795. In 1954, Suriname became one of the constituent countries of the Kingdom of the Netherlands. On 25 November 1975, the country of Suriname left the Kingdom of the Netherlands to become an independent state, nonetheless maintaining close economic, diplomatic, and cultural ties to its former colonizer. 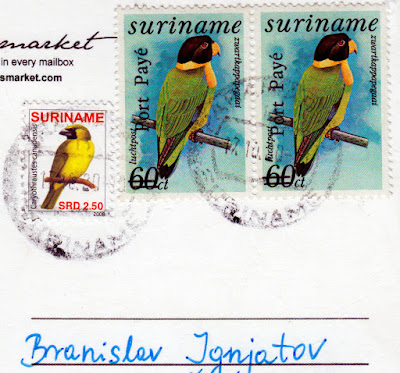 Interesting bird stamps are used. Smaller one is Yellow-green Grosbeak (Caryothraustes canadensis), issued on 15.8.2008. But stamps with Caica Parrot (Pionopsitta caica) are more interesting. Stamp is originally issued on 27.4.1977, but they overprinted this stamps with words "Port Payé", which means "postage paid". Overprinted stamps are issued on 11.4.1994.

Thank you so much, Joanna and Cass!

Posted by Branislav Ignjatov at 02:19