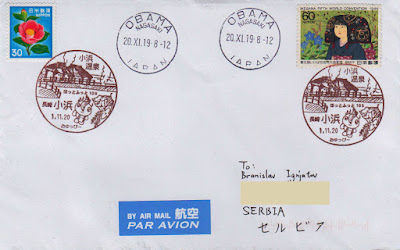 Obama is a city located in Fukui Prefecture, Japan. As of 1 August 2018, the city had an estimated population of 29,435 in 12,057 households and the population density of 240 persons per km². The total area of the city was 233.09 square kilometers. Obama gained publicity in the United States and elsewhere in 2008, as it shared its name with senator Barack Obama, who was running for, and later became President of the United States.

It's interesting to see date on special postmarks. Japan use few calendars, and here you can see its a first year on new era, cause Japanese emperor abdicated and left his throne to his son. With every new emperor, counting of years start from one! But for regular postmarks, they use modern Gregorian calendar.

Posted by Branislav Ignjatov at 21:25