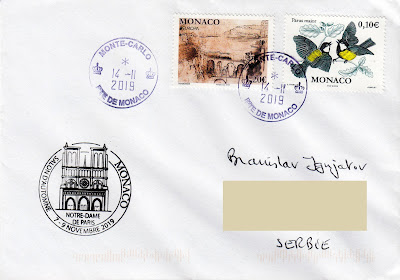 This stamp represents the Sainte Dévote Bridge, which is set in the eponymous valley, overlooking the Church dedicated to the patron saint of Monaco. Originally this bridge was a railway bridge. Since the underground railway station was inaugurated, it has become a road bridge. Stamp was released on 3.5.2018, and this cover was sent from philatelic exhibition Le Salon d'Automne 2019 in Paris (on special postmark).

Posted by Branislav Ignjatov at 03:49