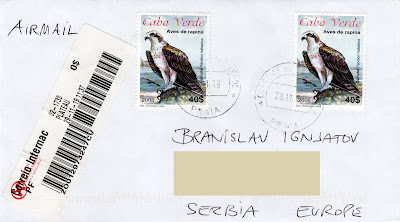 I received this magnificent registered cover from Cabo Verde, an island country spanning an archipelago of 10 volcanic islands in the central Atlantic Ocean.These Western osprey stamps are from set Birds of prey, issued on 25.11.2008. Western osprey (Pandion haliaetus) — also called sea hawk, river hawk, and fish hawk — is a diurnal, fish-eating bird of prey with a cosmopolitan range. It is a large raptor, reaching more than 60 cm in length and 180 cm across the wings. The osprey tolerates a wide variety of habitats, nesting in any location near a body of water providing an adequate food supply. It is found on all continents except Antarctica, although in South America it occurs only as a non-breeding migrant.


Thank you so much, Wolfgang!

Posted by Branislav Ignjatov at 03:19