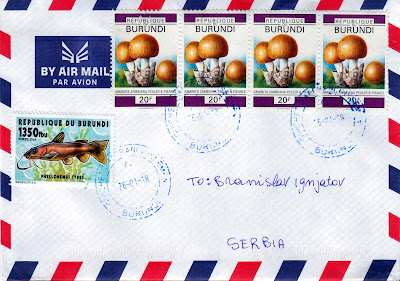 I received a cover from Burundi, landlocked country in the African Great Lakes region of East Africa, bordered by Rwanda to the north, Tanzania to the east and south, and the Democratic Republic of the Congo to the west. It is also considered part of Central Africa. There are four Amanita zambiana mushroom stamps, from set issued on 30.09.1992. Fifth stamp is Phyllonemus typus, from set Fish from Lake Tanganyika, issued on 20.10.2014.

Posted by Branislav Ignjatov at 21:42