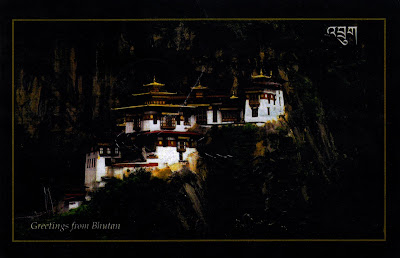 This is my first postcard from The Kingdom of Bhutan, a landlocked country in South Asia. Located in the Eastern Himalayas, it is bordered by Tibet Autonomous Region of China in the north, the Sikkim state of India and the Chumbi Valley of Tibet in the west, the Arunachal Pradesh state of India in the east, and the state of Assam and North Bengal in the south. Thimphu is its capital and largest city, while Phuensholing is its financial center. The country's landscape ranges from lush subtropical plains in the south to the sub-alpine Himalayan mountains in the north, where there are peaks in excess of 7,000 meters. State religion is Vajrayana Buddhism.

This postcard was sent from Phuensholing, with stamp from set Traditional Sports, issued on 15.12.2015.

Posted by Branislav Ignjatov at 14:43