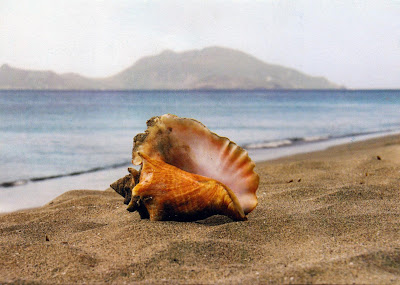 This is Lobatus gigas, originally known as Strombus gigas, commonly known as the queen conch, is a species of large edible sea snail. This species is one of the largest molluscs native to the tropical northwestern Atlantic, from Bermuda to Brazil, reaching up to 35.2 centimetres in shell length. Picture is taken by sender itself, my friend Wolfgang, on beach in Cotton Ground. Cotton Ground is a town on the island of Nevis in Saint Kitts and Nevis. It is the capital of Saint Thomas Lowland Parish. 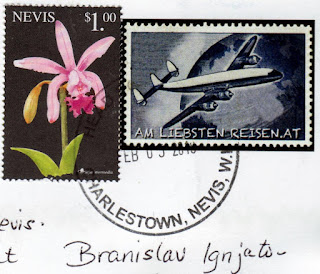 Two stamps are used for postage, but one fell off during journey to my home. This flower stamp is Cattleya intermedia, from set Orchids, issued on 15.06.1999.

Thank you Wolfgang and friendly people from philatelic bureau in Nevis!

Posted by Branislav Ignjatov at 20:24