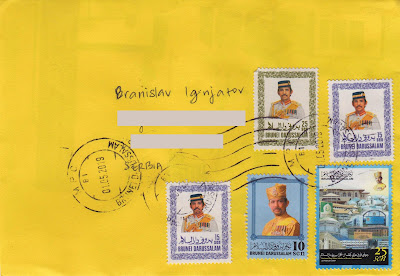 After four postcards from Brunei, i finally received also my first cover from this small country located on the north coast of the island of Borneo in Southeast Asia. On every stamp from Brunei you can see Sultan Bolkiah (at least as a small icon in upper corner), member of The House of Bolkiah. The House of Bolkiah is the ruling royal family of Brunei. It is composed of the descendants of the first sultan Sultan Muhammad Shah and his family. The Sultan of Brunei is the head of state and absolute monarch of Brunei. Since independence from the British in 1984, only one Sultan has reigned, though the royal institution dates back to the 14th century.

Posted by Branislav Ignjatov at 01:43