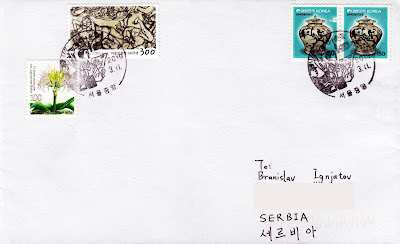 The March 1st Movement was one of the earliest public displays of Korean resistance during the rule of Korea by Japan from 1910 to 1945. The name refers to an event that occurred on March 1, 1919, hence the movement's name, literally meaning "Three-One Movement" or "March First Movement" in Korean.  Movement arose in reaction to the repressive nature of colonial occupation under the de facto military rule of the Japanese Empire following 1905, and inspired by the "Fourteen Points" outlining the right of national "self-determination", which was proclaimed by President Woodrow Wilson at the Paris Peace Conference in January 1919. After hearing news of Wilson's speech, Korean students studying in Tokyo published a statement demanding freedom from colonial rule. Approximately 2,000,000 Koreans had participated in the more than 1,500 demonstrations. Several thousand were massacred by the Japanese police force and army.

Posted by Branislav Ignjatov at 21:53