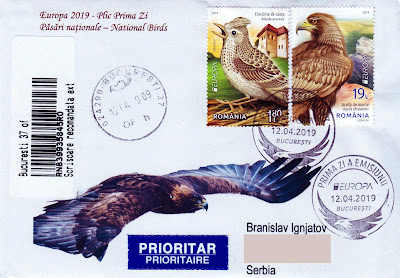 Romanian post issued par of stamps in Europa CEPT 2019 National Birds joint issue of European postal operators. This years theme is one of my favorites, and most of postal operators designed really nice stamps.On first stamp is eurasian skylark (Alauda arvensis), a passerine bird in the lark family Alaudidae. It is a wide-spread species found across Europe and Asia with introduced populations in New Zealand, Australia and on the Hawaiian Islands. It is a bird of open farmland and heath, known for the song of the male, which is delivered in hovering flight from heights of 50 to 100 metres. The sexes are alike. It is streaked greyish-brown above and on the breast and has a buff-white belly.

On second stamp is golden eagle (Aquila chrysaetos), one of the best-known birds of prey in the Northern Hemisphere. It is the most widely distributed species of eagle. Like all eagles, it belongs to the family Accipitridae. These birds are dark brown, with lighter golden-brown plumage on their napes. Immature eagles of this species typically have white on the tail and often have white markings on the wings. Golden eagles use their agility and speed combined with powerful feet and massive, sharp talons to snatch up a variety of prey, mainly hares, rabbits, and marmots and other ground squirrels. Golden eagles maintain home ranges or territories that may be as large as 200 km2.

Posted by Branislav Ignjatov at 13:46