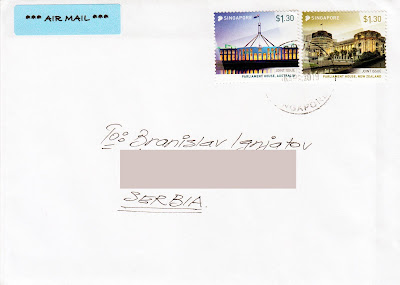 This joint issue marks the 50th anniversary of bilateral relations between Singapore and Australia, and Singapore and New Zealand. Singapore gained independence from Britain in 1963, uniting with other former British territories in the region to become part of the Federation of Malaysia. In the wake of administrative and ideological disputes, Singapore was expelled from the federation on 9.8.1965, becoming an independent nation in its own right. Symbolizing the political democracy through which Australia, New Zealand and Singapore are all governed, the parliament house of each nation is shown across the three stamp designs issued on 14.8.2015. Cover arrived with two stamps from this set of three stamps, witch depicts parliament buildings of Australia and New Zealand.


Posted by Branislav Ignjatov at 16:34