Flags of the World Series: Jordan 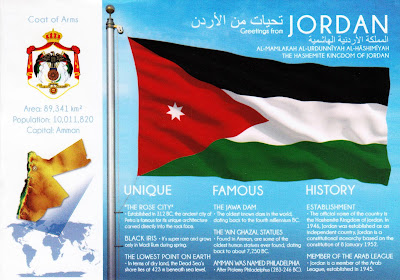 Jordan is an Arab country in Western Asia, on the East Bank of the Jordan River. Jordan is bordered by Saudi Arabia to the south and the east, Iraq to the north-east, Syria to the north and Israel and Palestine (West Bank) to the west. The Dead Sea is located along its western borders and the country has a small coastline to the Red Sea in its extreme south-west, but is otherwise landlocked. Jordan is strategically located at the crossroads of Asia, Africa and Europe. The capital, Amman, is Jordan's most populous city as well as the country's economic, political and cultural center. 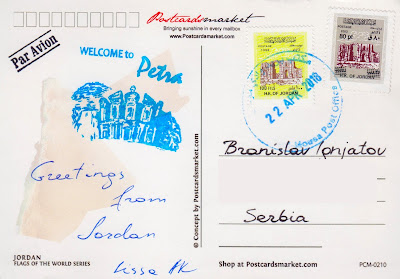 On the back of postcard is nice postmark related to Petra and two definitive stamps dedicated to Arch of Hadrian. Left one is issued on 15.5.1996, and right one is overprinted stamp from 2003, and reissued on 20.7.2017. I received this postcard in April 2019, one year after sending.

Posted by Branislav Ignjatov at 09:40